Why do people use Barter.vg?

I'm new to trading and I think SteamTrades is a good enough site so why would people use Barter.vg? The interface is confusing and I see no advantage of using it. Can some expert traders explain to me the advantage of using that site? It's just completely confusing me. Thanks for the ones who'll help.

Which trading site do you prefer?

i can spend countless hours sifting through SteamTrades looking for someone who wants way more than their stuff is worth...or i can decline all the crap offers i get instantaneously on barter.vg

it's also helpful that you can see the game images / pricing / etc on barter.vg, and it imports your wishlist, so you don't have to manually list everything you are interested in. I did a bunch of trades since I signed up and it was really easy!

SteamTrades has no actual interface designed for trading - it's just a forum - and if you have a lot of stuff to trade and someone offersd you a lot of stuff it becomes hard to use. If you have few items and trader has few items - no problem, it takes same amount of time, but if you trade tens or hundreds of games and other party does the same it means that each time both of you gotta manually read through all these tens-hundreds of offers manually, while at barter you can set up a trades any way you like, which in case of loads of trading saves you a lot of effort.

Barter solves all of that, I can find wishlisted games I want and other stuff I'm interested in with one click, and it automatically shows me only people that could be potentially interested in what I have, so everybody wins.

Still, there is a lot more that could be improved, Barter as a website is just awful, but it's not like I need something more than a text, images and some buttons to get what I want to - matching works perfectly.

I'm using both and while on ST you find people that are usually interested in 1 or 2 games, on Barter I exchange games in 10:10 ratios, instantly, without much hassle. If you have 2-3 titles for trading including 1-2 games you're interested in, then it probably doesn't matter to you, but once you get 400+ bundle games and 90+ wishlist like me, you'd need to be crazy to prefer ST over barter.

Do I have to use the Tier tag in Barter.vg in both tradable and wishlist so they would match? The interface is really confusing me.

No. You have to set up preferences on your profile, fill the games that you have and wait for other users matching you, or match them yourself. Example of my profile. If you want to see how it works, find something from my list that you're interested in, offer something I'm interested in and see yourself how it works since I accept all games that I don't own yet. It's really easy once you get a hang on it.

You can also leave a link to your own profile so I check myself.

Site has many things and looks... well, just have many things never understood how to use it

Barter is mainly games for games, and makes it easier to match, accept/reject offers, however I have received lowball offers half the time so I have no preference towards it.

If you deal with paypal or keys, ST searches aren't bad, I do wish more people put prices to their long lists for an easier time to make a fair trade. Threads with prices are my favorite, it sort of feels like looking through a steam store sale.

Oh so you can't sort which games you want for the tradables you have? And here I'm hoping I could do that. Thanks for the info :)

For a specific game? For example I want a list for my Arkham City and a different list for my Steel Division. I can do that? How?

pick Arkham city/steel division under your tradeables, make sure you have imported your wishlist for a better match list. 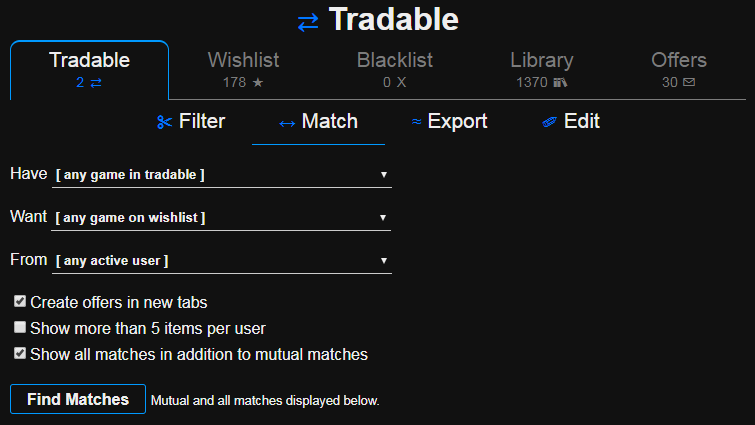 Oh I was talking about when I'm not looking and someone was offering me. I would have a different wishlist for Batman tradable and another one for Steel Division, I was hoping I could separate the wishlist for each.

No sorry :( gotta take it all together.

+1 to that. Threads with prices are the best. I do wish more people do those, especially the ones that only want paypal or keys and not games to trade with anyway...

Automatic game matching, far fewer scammers or unrealistic trades (of course they still happen), dispute resolution, the ability to click the game title link and go to Steam, and more reasons I am forgetting. There is no comparison. I have used ST recently and had some success, but overall it sucks.

You're not wrong about the interface, but ST has a shitty one too. I never remember which field to fill in for the games I have to trade.

You forgot to mention lestrades: https://lestrades.com
It's like Barter.vg but it's GUI is way better.
I see no point in trading through ST as many have stated here

Thanks for the link. I'm still new to trading so I don't know the trading sites. I just stumbled upon those 2.

Problem with barter is the community. Most people trade primarily on the barter.vg H:W ratio, and most people on the site are game hoarders, so offers are skewed heavily to game hoarders and trade sharkers. I have to send at least 20 equal offers (like humble BTA tier for humble BTA tier) to maybe get one trade on there.

This is true. Barter is full of resellers. I generally don't care what someone does with a key after I trade it away, but it can take a few tries to get a trade done. Still, I have had far more success there than on ST. And I feel freer to make offers on Barter, since I can see the person's wishlist matching my tradables.

I found this out quite early on as well. But since making offers was so easy, I wasn't too bothered in making tens of them in a few minutes. It's worth the off chance for a fair trade.

Here are some of the pros of Barter over ST:

A good amount of traders on ST are not active anymore but their threads are still open and you could make offers there only to never get a reply. People who don't use Barter often on the other hand get marked as innactive.

Search engine on ST is horrible. If you're looking for game that has some of the same words as another game you'll find those games too sometimes instead of the one you're looking for. For example if you want "borderlands" you could in theory get list of threads who only have "borderlands 2" or "tales from the borderlands" or "borderlands presequel" but not the actual "borderlands (first game)" you're looking for. There were many cases where I'd search for one game and the ST's search would throw a bunch of threads that don't actually have it, but instead they have different games from those series or even games completely unrelated to the one I want.
On the other hand Barter doesn't have those issues. It'll list only games you have on your wishlist if you do general matching or games you specifically wanted to get matched for.

Finding people interested in trading their games for certain items is also easier on Barter than on ST because there's a bunch of idiots on ST who write things like "I don't want item X, Y and Z" in their "I want" section so those threads will pop out in your search when you put those items in your "I have" search form.

Barter allows you to set whether you want people to only be able to offer you things on your wishlist or can they also offer you games outside your wishlist if those games meet certain criteria.

Each game has its own page on Barter where you can see how many people have it on their tradable and wishlist lists, how many times it was bundled and where, does it have cards, review rating, retail price and so on. There are also links to its steam store page along with several steam-related websites.

Overall Barter is by far a more superior website when it comes to trading than ST. It's better in pretty much every way and it's easier and quicker to find trades you want. I think the only thing ST has over Barter is that people can list their prices in items for each game in their thread, but very few traders actually do that though.

Hi,
does anyone know - How to add same item to tradable?

It's a trading tag for multiples. It basically puts nx next to the game where n is the amount of it you have.