I was checking one of the Humble Comic Bundles available and, as usual, I went on to customize the splitting of my payment. To my surprise, there was a new slider I had never seen before for GG.deals. The defaults are ridiculous.

I already knew that the payment splitting usually sucks, especially Humble taking a fixed amount that might sometimes feel a bit too much (fixed 30% to Humble while default for charity is a mere 5% -less than 1€-), that's why I like to adjust my splitting. But what I didn't know is that if, for some reason, you've followed a referral link at any given time, they'll be getting a cut from your payment and you won't know about it unless you click on that "Adjust Donation" dropdown. What troubles me most is that they're taking 15% (default) and 12,5% ("extra" to charity). Meaning by default they're getting three times more than the charity O_o

I still have to find a way to remove that referral, I've had a look around the settings but I haven't found anything.

EDIT: You can manage it by going to https://www.humblebundle.com/partner and clicking "Opt Out" in the blue section at the top. There will only be a blue section if you have a partner linked. (thanks to ProphetFinagle)

I don't have anything against referrals, but this is somewhat wrong. If Humble wants to reward their referrals, they can do it from they cut. I also don't like how they enforce a minimum (30%!) cut for themselves, while publishers can get 0%. Yes, they're running the site, but without publishers giving them their games, books, comics, assets, software,... bundles wouldn't exist. They should also take a minimum cut (which should be taken, of course, from Humble's cut). 25%-5%, 20%-10%,... I don't know, but what is going on now doesn't feel right.

So, TLDR, check where your money is going and act accordingly to what you feel about Humble and/or the publishers. I tend to do an "all to charity" (minus Humble's enforced cut) if I don't like how the publisher designed the bundle: region locks, keys for a base game that can't be upgraded to a "deluxe" or "collector" edition unless you remove it from your account and repurchase it again (i.e. Vertigo, Control,...), knowingly giving keys to specially made depots so you can redeem them even if you already own the contents, lots of rebundles,... And, of course, I always adjust Humble's amount to their enforced minimum. 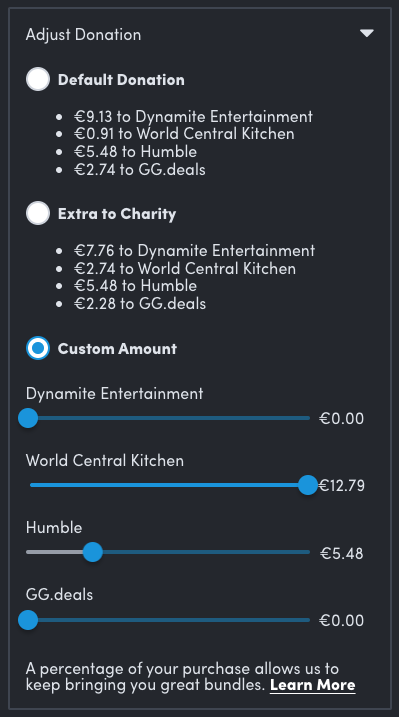 I never looked at comics bundles but I'm pretty sure the minimum cut for Humble on games bundles is 15%.

Personally I usually give Humble and the publisher 15% each and the rest goes to charity.

I've had that problem with the GG.Deal referrer too a few years ago. Didn't occur again after that but that might also be due to the ClearURLs browser extension.

I don't see being able to choose where your money goes as a problem, that's very much what Humble Bundle was built on. Completely agree that the default split is absolutely nuts though. Referrals getting that much as the default seems excessive.

Go here: https://www.humblebundle.com/partner click Opt Out in the blue section at the top. (There will only be a blue section if you have a partner linked).

Ah, thanks, that worked fine!

If you dislike referrals on HB and you use the uBO adblocker, you can add this custom rule to your list:

It basically strips the ?partner=xxx part from HB urls.

The money that you give to charity. What percentage goes to the people calling your phone, banging on your door, accosting you on the street, the shady companies the charities hire to call/bang/accost/harass, the managers, the managers' managers, the CEO's Ferrari, the VIPs' travel/accomodation/entertainment, rent on that big posh office in the city, the janitors, the accountants, the legal team? What percentage goes to the people in need?

^ I ran the numbers. Checks out.

Thanks for the link

Imho they should introduce a minimum share to every single slider. And give us the option to switch referrers to our preferred choice.

Didn't know humble approves websites, that promote grey market and key reselling. Too bad SG doesn't give them enough traffic so they ban users here, while gg.deals will get fat 10% bonus :]

Right? I was really surprised to see ggd had a partnership with them. It's a great site and I appreciate the option to ignore the shady reseller market but it's ironic Humble is only gung-ho on "reselling" when they have zero chance of making a fat buck.