GOG Galaxy 2.0 announced, to merge all game libraries into one launcher

"One library - Import all your games from PC and consoles, build and organize them into one master collection."
"Game launcher - Install and launch any PC game you own, no matter the platform."

They apparently play on their existing strengths, known name, drm-free, privacy respect, no spying on you... to get ahead of existing competition like playnite (which is free/open-source, btw, but some are not)...

TBH, I find the existing Galaxy client a bit confusing, but it does work when you get used to it's ways. This upgrade might be a good thing.

I think this is a pretty kool idea when I originally heard about it. I'm not sure if I actually would use it though the more that I think about.

From my understanding all your games show up in one client under one list, it still will launch the client the game is part of like the Uplay client launching from purchases on Steam. Even though I have a bunch of clients on my PC, Steam is still the one with my main library. If I played a bunch of games on other clients than Steam also then it might be worth it, but as it stands right now since it's only a few, I might as well just launch the clients themselves instead of using Galaxy 2.0.

It does offer other features as well though, like one of the best search functions of any client. Just press CTRL + F and type, you'll search through every game you have as well as games you don't. It's brilliant.

What is less brilliant, and basically an issue that kills the whole thing for me, is that the client always has several percent CPU usage in the background. That doesn't work for a client meant for games. It's real shame though, because the design and ease of use is by far the best of any client.

If steam wouldnt have launched the new design for library I think I would have loved the gog galaxy even more.. I forgot I applied and this thread showing up reminded me to check my email if I had an invitation.. Obviously got it and tried it out and I have to say - first impressions are good. At least visually..

But as FatoOfOne stated already - having maybe 1 or 2 games I have installed from other launchers its not really that much of a gain.. I wasnt bothered to open origin or epic just to launch one game...

Sadly it doesnt show UPlay achievements.. But it shows achievements for other launchers. Thats pretty cool

The great launcher wars.
... i wish someone illustrated that in a comic.

While it's great having all your games spread all over multiple DRMs (and non) into one place, it just isn't enough for me to move over to GOG until they add badly needed user created content to the Galaxy client. Granted it had user profiles, albeit rather pathetic ones you couldn't really customize, it was sadly removed in Galaxy 2.0.

Stuff like steam been around for over a decade.
Galaxy been around for what, 4-5 years?
Of course it can't measure up.
But it seem to be doing fairly well, nevertheless.
Give it some time i think. Needs some more cooking i think. ^^)

It lists BF1 for me, so it isn't a general Galaxy 2 issue. 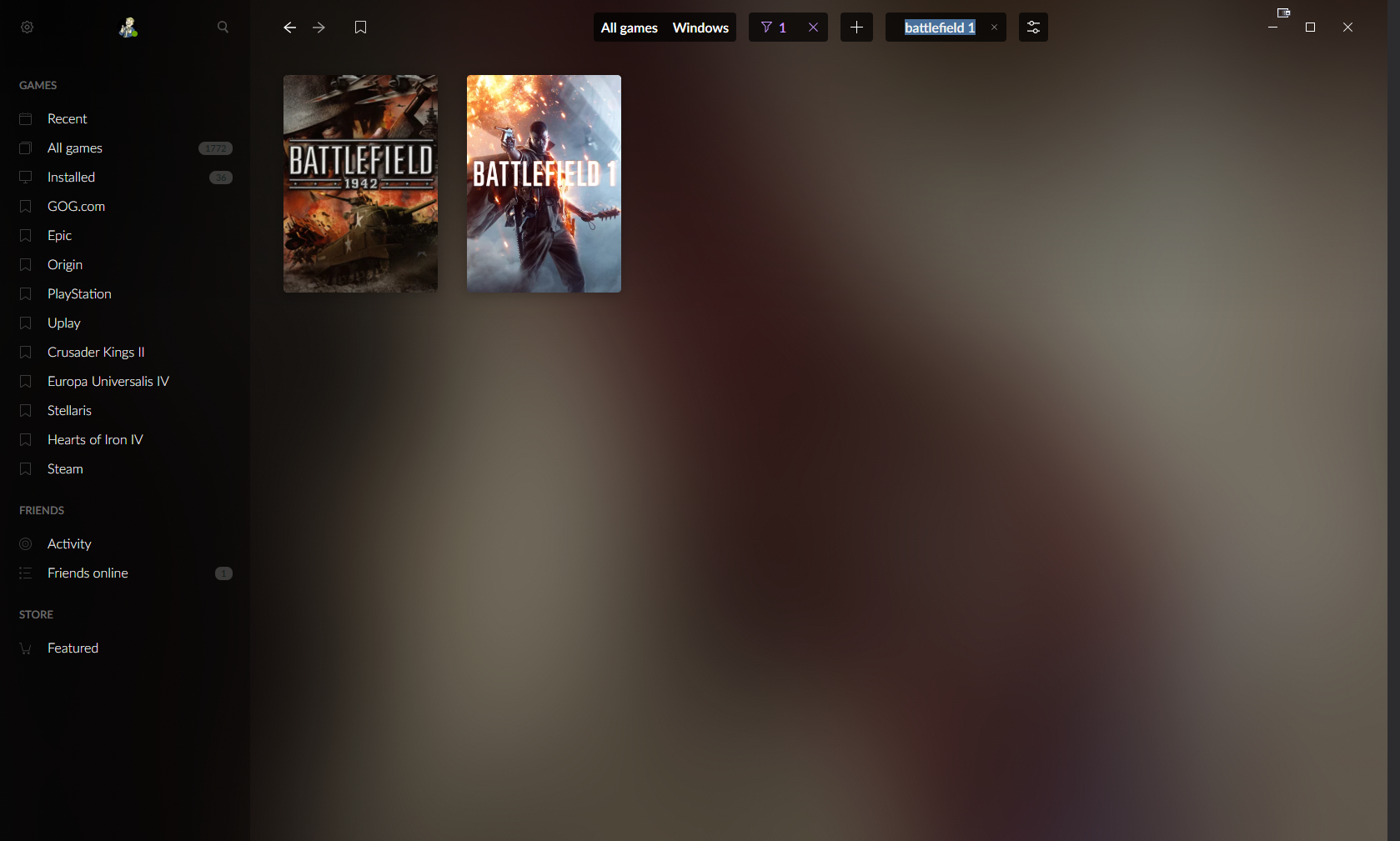 Sorry if this has been asked before, but I expect you'd need to install all the other clients you have games on in order to play them through GOG Galaxy 2.0 right?

Do I still need to have other gaming clients installed on my PC?
Yes, if you want to get access to any features specific to that platform, e.g. installing or auto-updating games, cloud saves, etc.

Yep. Not tried directly yet GOG Galaxy 2.0, but I'm pretty sure it works like Playnite.

Not sure about the rest, but pretty sure Steam still doesn't allow you to uninstall it without uninstalling all the associated games, so that one is out to begin with.

Will it import my steam favorites or category settings ?

I ask because I'm currently using Steams favorites system to manage my backlog. I mark a game as a 'favorite' when I add it to my Steam account, then remove it when I've played the game*. I use favorites instead of categories because that's less clicks( or at least it was less clicks before the latest Steam UI change). Though the new UI means I could easily put them all in a 'backlog' category.

The problem is that I've currently got over 100 games in my favorites. Manually marking them as unplayed via whatever system works best in the Galaxy 2.0 client will be too much work to avoid errors. So I'll need some import system for Steam

Other clients only have one or two unplayed games in them, so those I can manually mark as unplayed.

*Or if taken a closer look at the store page of a game I picked up from a bundle and decided that I'm not interested in playing that game.

Here's the most recent review on youtube for it.
https://www.youtube.com/watch?v=e6PArBimLrw

For those curious about it here's a quick overview. You connect any client(Steam, Epic, Uplay, Xbox Live etc. etc.) to Galaxy 2.0 and it adds all the games, achievements, friends list etc. to Galaxy 2.0 and puts them into one list as well as segmented lists. If you launch a game from Galaxy 2.0 it will launch Steam or whatever client your game is on, so you're running 2 clients. You do have the option to make the client shutdown when you close the game. You can change the display picture, background picture and icon as well as the name for any game. You can change the download location as well as the download bandwidth for games.

I always that GoG made a mistake calling their launcher GoG Galaxy. I clearly should be named Magog

What, you don't think they should go all in with "Oh My GOG: The Heavenly Launcher"?
I mean, if you're going to that theme, may as well go all-in. :P

So despite being slightly salty about never gotten an invite to the closed beta I'm pretty happy with the current state. It's a nice interface and a very convenient way of keeping track of games I have spread over different stores 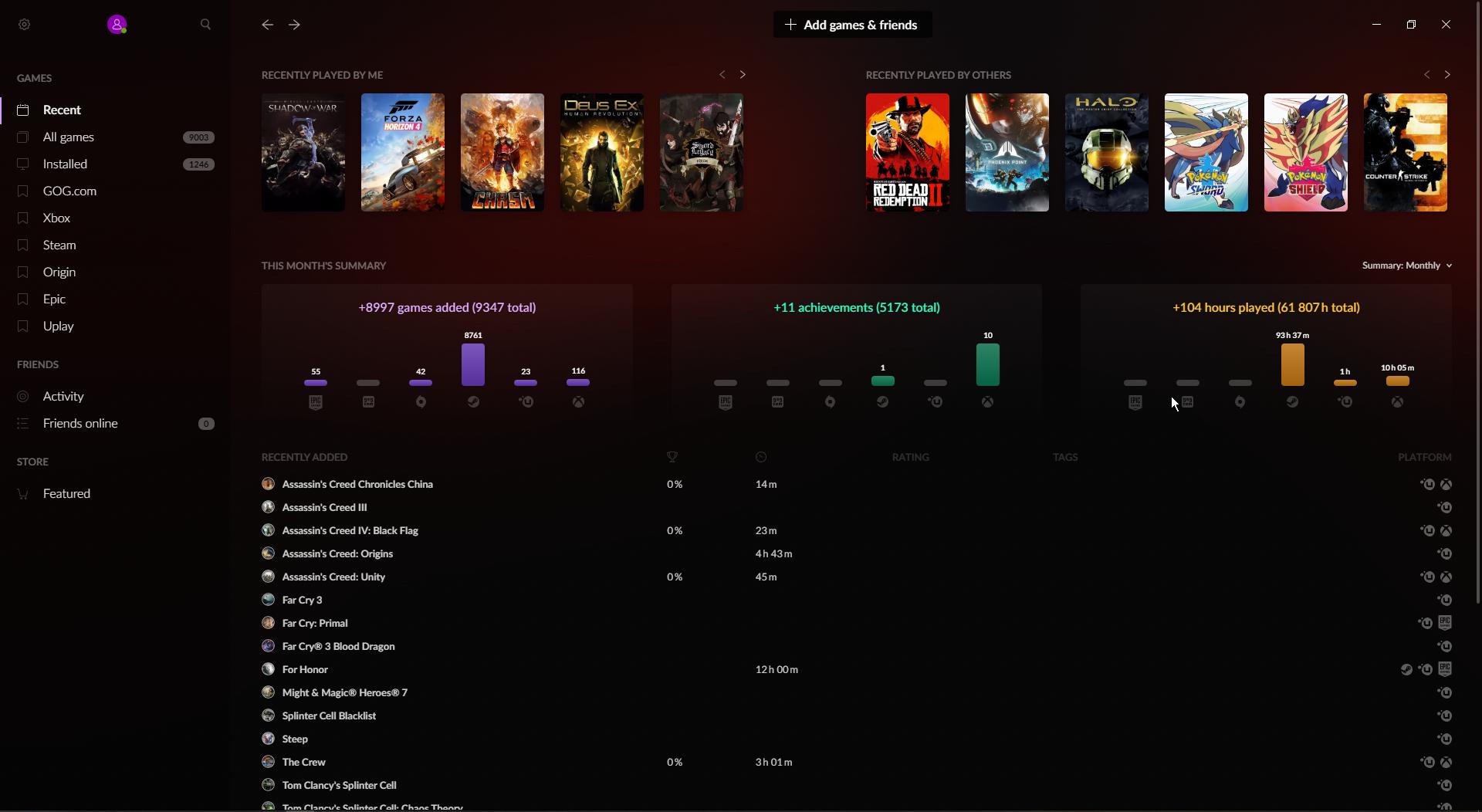 "connection to gog communication service has been lost" or something like that... keeps crashing during initial population of my GOG library. I will try again another day :P

edit: looks like this is the years-old bug of GOG Galaxy not working properly in a remote desktop session... so I guess the 2.0 client is based on 1.0 and not a totally new program.